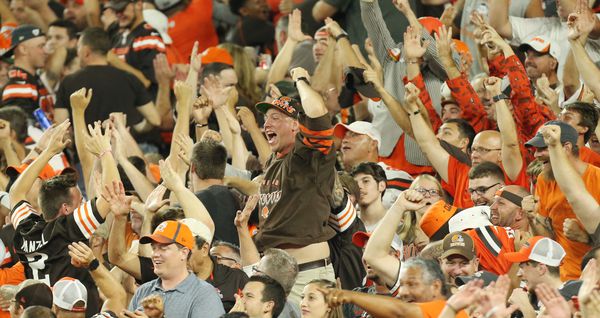 He ranked Kansas City at No. 31. That’s as outrageous as the Browns ranking.

KC and Browns fans have a lot in common. They are loyal. They have suffered a lot. They both have seen their franchises revived by John Dorsey.

1. Fan Equity: How much do fans spend on their team?

2. Social Equity: How much social media action? He used Twitter.

3. Road Equity: How does the team draw on the road?

Lewis wrote he “controlled for factors like market size and short term changes in winning and losing.”

But the fact is the survey favors teams with higher ticket prices. And what does that favor? Teams in larger markets where everything is more expensive.

Lewis insists he controls for big vs. small markets, but other than the L.A. Rams (which just moved from St. Louis in 2017), the bottom five are mid-market franchises.

Only Pittsburgh breaks into the top five, and the Steelers rank No. 16 in the “fan equity” department.

Some common sense is needed:

1. Teams such as the Browns who have been awful for a long time are not going to draw well on the road.

2. Teams such as the Browns who are in middle markets and keep losing must keep ticket prices low by NFL standards.

3. No clue what to make of the social media part because there is so much social media. The Browns rank No. 16 (middle of the pack) in that area.

4. How in the world can Kansas City and its avid fan base rank behind fan dead zones such as Cincinnati and Jacksonville?

5. Fan interest can’t just be about spending money, although the bottom line in the NFL certainly makes that a major priority.

2. Of course, the team has been dismal nearly every year since the franchise returned in 1999. From 2015-2017, the Browns were 4-44. I refuse to blame fans for dropping season tickets to a team so abysmal.

3. But the Browns have lowered the capacity at FirstEnergy Stadium after some renovations. A sellout is now 67,431 fans. They had five last season. Obviously, some of the fans who bought tickets stayed home as the loses mounted early in the season.

4. Baker Mayfield pleaded with the fans to come to the final home game. The Browns suddenly were hot after the mid-season coaching change and they drew 67,895 (above the 67,431 sellout total) for that victory over Cincinnati. I’ve not heard anything official about sales for 2019, other than they are way up.

SPEAKING FROM THE HEART

No NFL fan base has suffered more heartbreak and trauma than the Browns. I’m not talking about The Drive, The Fumble and Red-Right-88.

Those were excruciating losses, but those teams were excellent and fun to watch.

No fan base had its team move and then come back with an expansion situation that oozed unprecedented incompetence. From 1999-2017, no NFL team lost more games: Two winning seasons and one playoff appearance (a loss).

Yet, the Browns announced sellouts for the first three games of the 2018 season. It’s amazing this team has been able to sell a single season ticket.

I don’t know how you analytically put a statistic on trauma, but Browns fans have been rocked by it.

Yet, when the Browns beat the Jets on September 20, 2018, it had the highest TV ratings for a Thursday night game in three years.

That was the Browns vs. Jets, two bad teams. Tyrod Taylor was still Cleveland’s starting quarterback, so no one was tuning in to see Baker Mayfield. The Browns rookie did play and led the team to a victory after Taylor was hurt.

The Browns ended the season with a big game in Baltimore. It was the second-highest rated NFL game that final Sunday.

I was not able to find how individual teams ranked in TV ratings over an entire NFL season. That’s because all games are on national networks. It’s complicated.

But fans watch the Browns, period.

One of the most amazing TV stats came from the NFL draft.

The Browns didn’t have a first round pick, but Cleveland ranked fourth in TV ratings for the draft.

Put Cleveland and Columbus together, and it was No. 1. I suppose there were some Bengal fans in Columbus watching, but most were probably Browns fans.

The first group of training camp tickets were gone in an hour. The fans are so excited about a team that finished 7-8-1, they are acting as if the Browns had reached the Super Bowl.

I don’t know where Browns fans rank, I just know it’s a lot higher than No. 27. And I become very defensive when Browns fans are criticized for lack of support. That’s because no other fan base has had to endure such misery.

This jack off redefines what an asshole is.

May I remind you, Mikey - that 27th ranked fan bases would NOT fight the league (and consequently subject themselves to 20 years of shitty and spotty officiating) to get their team, their colors, and their history back after it was stolen from them.

Don't forget to wipe up after slobbering all over ESPN and the TV networks' knobs.