Cleveland Browns: A spotlight on young players who stood out at OTAs – Terry Pluto 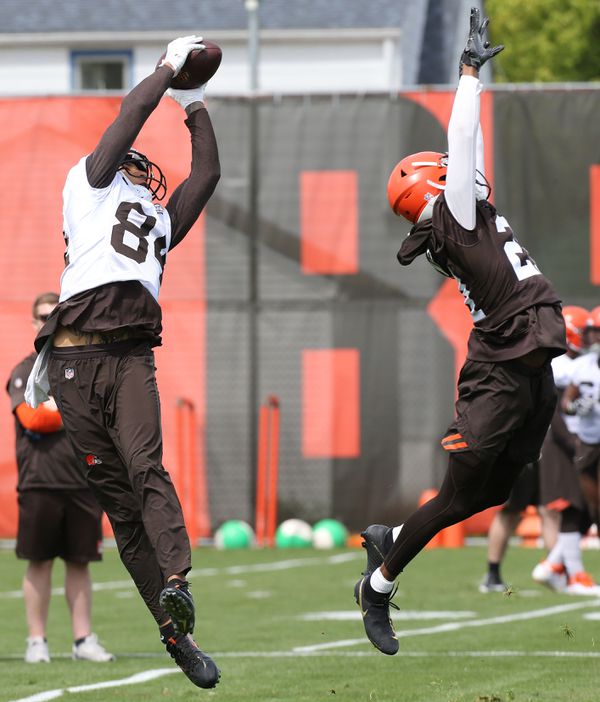 I talked to some people who watched some of the OTAs not open to the media. I’m going to take you into the minds of the decision makers, and how they view these workouts.

As Freddie Kitchens stressed, it’s important for the players to be at the voluntary OTAs, but it’s not mandatory. While the media tends to dwell on Odell Beckham Jr. not being there and if Duke Johnson will be traded, the Browns don’t agonize about veterans. The spotlight is on the young players and the guys who have a shot to make the roster. They are not the big names.

With that in mind, here we go:

2. One of the goals of the front office was to add depth at cornerback because Ward (concussions) and Mitchell (broken wrist) were hurt last year. The 6-foot-2 Williams is lanky, fast and a natural at the position. He could beat out someone by the time the season opens.

3. Defensive back Lenzy Pipkins got into a brief fight with wide receiver Derrick Willies when the media was there. Both are having good camps. Pipkins played 12 games for Green Bay in 2017. Assistant GMs Alonzo Highsmith and Eliot Wolf were in the Packers’ front office back then. They like him.

4. The Browns want to pile up the cornerbacks. They also have Philip Gaines (6-year veteran) and Tavierre Thomas, who can help on special teams. Seventh-rounder Donnie Lewis is recovering from a foot injury. New defensive coordinator Steve Wilks liked him before the draft.

5. The Browns believe the 6-foot-4 Willies was emerging as a viable NFL receiver when he fractured his collarbone early in the season. Quarterback Baker Mayfield developed some chemistry with Willies in training camp last year. He caught three passes for 61 yards in the regular season before he was hurt.

6. One of the reasons the Browns could trade Johnson is Dontrell Hilliard. The Browns front office is run by scouts at heart, meaning they love to find undrafted players who contribute. Hilliard made the team in that capacity last season. Listed at 5-11, 202 pounds, he showed up having added 10 more pounds and seems faster.

7. Nick Chubb is the starter. Kareem Hunt was eye-popping in various drills, but he’s suspended for the first eight games. Johnson is sitting out. Hilliard has a chance to get noticed, and he’s doing exactly that.

8. One of Wilks’ defensive schemes is called “Buffalo Nickel.” It comes from the Carolina Panthers, where Wilks was an assistant. One variation has a safety really close to the line of scrimmage. At his introductory press conference, Wilks mentioned a special role for Jabrill Peppers. That was it. Peppers has since been traded.

9. Veteran Morgan Burnett, cut by the Steelers in April after requesting his release, is the obvious choice to start at strong safety. But the Browns have been intrigued by Jermaine Whitehead in that role. Another former Packer (2017), Whitehead played 24 games in that last two years. I keep hearing, “Don’t ignore this guy.”

10. The Browns have a lot of tight ends – David Njoku, Demetrius Harris and Seth DeValve are the top three. Njoku and Harris would probably receive the most playing time. Harris is a superb blocker. DeValve has been with the team since 2016, and has to prove he can stay healthy.

11. Tight end Orson Charles was praised last year for his work as blocker. Browns tight end coach John Lilly coached Charles at Georgia, where he caught 45 passes in his final season. That could open a door for Charles to do more for the Browns.

12. But here’s the longshot, a scout’s favorite: Brush High product Pharaoh Brown, who was a blue chip recruit and played at Oregon. In 2015, he suffered a leg injury so gruesome doctors nearly amputated it, and that led to him being undrafted. Cleveland signed Brown (6-6, 258) to the practice squad last September and activated him, but he suffered a shoulder injury in December. The Browns want to see more of him.

13. While former offensive line coach Bob Wylie was entertaining and a star of the 2018 edition of HBO’s “Hard Knocks” last summer, the Browns believe James Campen is a significant upgrade. Campen was the Packers’ offensive line coach for 11 seasons. The Browns consider him to be an impact hire. Wylie has not yet caught on with another team.

14. During rookie/free agent camp, Kitchens said: "I will say this about our offensive line – this may be the best group in this setting, the minicamp, tryout guys, free agent guys – this is the best offensive line I have ever been a part of. I have been in the league 13 years. I have never seen a group collectively this good. We can actually function on offense, and sometimes in this kind of camp setting, that is hard to do.”

15. Campen is working sixth-round pick Drew Forbes at tackle and guard. Kendall Lamm is receiving a lot of work at both tackle positions. Bryan Witzmann is working at both guard spots and at right tackle. Eric Kush is working at center and guard. None of them is expected to start, but Campen is stressing depth and flexibility with backups.

16. The Browns don’t want an injury to any of their starting linemen to sidetrack the season and lead to an injury to Mayfield. Austin Corbett will receive the first chance to replace Kevin Zeitler at right guard, but the Browns signed veterans Witzmann and Kush as fall-backs.

17. Here’s another name: Chad Thomas, a defensive end and the team’s third-round pick in 2018. He was injured in training camp. Former defensive coordinator Gregg Williams never warmed to Thomas, and the front office was frustrated that the Miami product didn’t receive more than 22 snaps.

18. The Browns think the Thomas can help against the run and pass. He has a fresh start with Wilks and new defensive line coach Tosh Lupoi.

19. I was told Mayfield has looked very sharp. For the front office and coaching staff, it’s comforting not to go into all these workouts having to figure out who could possibly become a long-term starter at QB.

20. I will be speaking at the Uniontown Library (Lake Community) on June 4 at 6 p.m. I will be at the Lakewood Library on June 13 at 7 p.m. Both events are free.

I stand by my prediction back in early April..................watch out for Derrick Willies, WR. If he can stay healthy and get enough reps; I can see him being our Red Zone guy and another deep threat. jmho

My man, Stabber! Hop on aboard - there is plenty of room on the Willies Wagon!

You well remember how long I have been shouting that Derrick should not be forgotten. This was one of the "benefits" of Hue relegating Baker to second team duty in training camp last July. He worked with Derrick Willies - A LOT!

Those two formed a bond that should not be discounted. Like you said Stabbs - Derrick became Baker's "go to" guy - especially in the red zone. If I was making the roster decisions - WR is basically all sewn up.

I see the Browns keeping 6 WRs on the final 53. We currently have 12 WRs on the roster.

That leaves seven guys fighting for ONE roster spot. Wow. I am guessing the leaders in the clubhouse for that final spot would be Jaelen Strong or Dorian Baker. But these TC battles always have a way of sorting themselves out.

Remember just a few short seasons ago when any WR with a pulse was an immediate candidate for Canton in the eyes of the fanbase? The Dorsey effect - we have improved so much.

I want us to find that mentally and physically tough guy that we can rely on consistently to be on the field when you need him. A player like the Steelers had in Heinz Ward. No afraid and loved to make those great blocks for his team.

Different era my friend. Those "blocks" today will cost us 15.

Totally agree with your line of thinking. It always did my heart good to see Weinz Hard get blown up on a play.

He certainly came to the conclusion he NEVER committed a penalty - ever. Hence how I changed his name.